A Brief History of Coffee: How The Bean Gets To Your Cup!

When you were a kid, you might find it hard to make sense of why your parents drake coffee everyday. If coffee helped with the physical growth and cognitive development in children, you might have been taking multiple cups of coffee each day too. But that isn’t the case.

Well, there are two primary reasons for drinking coffee – it helps deal with stress, and it helps eliminate the drowsy feeling after you wake up from a good night’s sleep.

In this article, we will look into the origin of coffee, and when did humans start drinking coffee.

How Did we Learn to Drink Coffee?

Before we look into the coffee history, we have to embark on a journey through time, when our ancient ancestors first discovered fire. Before that, humans drank water at room temperature. But after they learned how to make fire and how to use it for their advantage, a new window opened up.

Soon humans started to boil water before drinking. This way, they could kill the germs, and other harmful particles in the water, which they usually collected from the river, or nearby waterfalls.

In time, humans grew tired of having the same beverage over and over again. So they started to boil water with plant leaves. This was a groundbreaking discovery, referred to as infusions, as humans didn’t need to chew the leaves separately. They could boil the leaves in water, which helped them extract the aroma and its essence.

It took them quite awhile to realize that coffee wasn’t poisonous. Once they recognized that, they couldn’t stop drinking coffee. But why so?

Caffeine, which is the main ingredient in coffee, doesn’t directly affect the human body. Instead, it kind of tricks the human brain to think it isn’t tired.

Adenosis is a compound that tells your brain to sleep. The longer you stay awake, the higher the amount of Adenosis in your brain. It binds with the brain receptors and tells them to slow down, thus making you feel drowsy.

As it turns out, Adenosis and Caffeine have similar chemical structures. After a cup of coffee, the caffeine finds its way to your brain. And the brain receptors happily bond with caffeine. Your heart rate and blood pressure increase in its aftermath, thus helping you stay awake for longer.

A quick fix to your sleepy mornings, right? But there is a downside to consuming coffee too. After 6 hours of coffee consumption, the caffeine content in your body decreases. And you feel a strong urge to go to bed.

Coffee in The Arab World

According to many historical artifacts, the history of coffee has its roots in the Arab world. Also, they are the ones who spread the coffee culture across the globe.

You might be wondering about the origin of coffee is from tropical regions. Then how did Arabs learn to drink coffee? We understand your doubts. But coffee is a heritage of the Arab world. You will find a picture of a Dallah, which is Arabic for a coffee pot, on one dirham coins in the Arab world.

Yemenis were the first people to bring coffee to the Arab world. Also, they were the first ones to have coffee as a drink. They believed that this drink helped them complete long pilgrimages to the Mecca.

There is another story that says an Ethiopian Shepard first discovered coffee. One day when he was out grazing his livestock, he discovered the first coffee bush. He noticed after his livestock has eaten the fruit from that bush, they were acting hyperactive. The shepherd, known as Kaldi, brought back some coffee beans with him and discovered its energizing effects on the human body.

The first arrival of Coffee in Europe took place back in 1565. After the Knights of St. John captured some Turkish slaves; they found out they were carrying coffee beans. The slaves quickly brewed a pot of coffee for the Knights. The Knights haven’t tasted anything like that before, so they brought back the slaves with them.

Soon after, coffee became the top import from Africa, and the upper-class Europeans started developing the habit of drinking coffee.

Back in 1683, the first coffee shop was opened by a Polish military officer in Austria. The shop made coffee a popular beverage by adding sugar and dairy into it.

Soon England started importing coffee from Turkey. And by 1675, there were roughly over 3,000 coffee houses throughout England.

Coffee was introduced in America by Captain John Smith, the founder of the Colony of Virginia. He learned about the coffee brewing techniques from his days in Turkey. He shared his knowledge with other Jamestown settlers in 1607.

Fast forward to 1668, and people in New York were brewing coffee with honey and cinnamon. It took another two centuries before coffee gained dominance over tea as the most popular beverage. But as World War I broke out, coffee supplies dwindled quickly.

However, America became the biggest purchaser of coffee right after the war ended. By the year 1922, America was the top coffee consuming nation.

Coffee in The Modern Era

Coffee is now a popular beverage worldwide. No matter where you are in the world, you will find a shop that sells coffee. Currently, 50 countries across Asia, Africa, South America, Central America, and the Caribbean produce coffee.

Starbucks, the most popular coffee chain in the world, was founded by a few Seattle-based entrepreneurs. Currently, the coffee chain has over 6,000 outlets in the USA alone. It also operates in 36 other countries.

Finland is the top coffee consuming nation in the world. Finns drink about 26.45 pounds (12kg) of coffee every year.

We hope you learned something new about the history of coffee today. We saw when did humans start drinking coffee and how it spread out throughout the world. If you have anything you want to share with us, please leave a comment below. 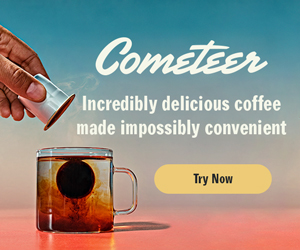